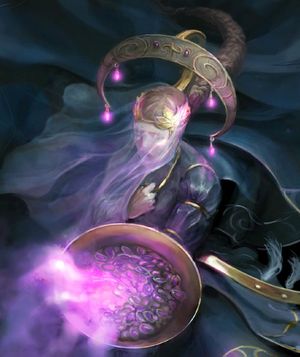 The Scinari Cathallars are Scinari Mages of the Lumineth Realm-lords, responsible easing their fellow Lumineth of harmful psychological energies and in battle direct these energies at their foes.[3]

The role of the Cathallars is one of high importance within Lumineth society, for it is they who are given the task of easing their fellow Lumineth of negative psychological energies, which can encompass despair, madness, and confusion. Using a vessel of aetherquartz, they trap these negative psychological energies before burning them away into the clouds in a solemn ritual.[3] However, they may also use this emotional by-product to drive their enemies crazy by channeling the smoke into the opposing ranks with their minds. This affects even the undead. [1]

They are also able to direct parts of the deadly energies that they channel through themselves into the realms, causing the grass to turn black and flowers in the area to wither. [1]

They are serious figures who move with calm serenity so that it appears as if it is in a trance. Their voices have the sound of a somber hymn [1]

Scinari Cathallers are wrapped in the long robes of their order and adorned with relics of purification. They wear neither gloves nor boots to stay in contact with the geomantic magic of the lands through which they walk and to be able to ground the emotions inside the used up aetherquartz if it is too strong. [1]