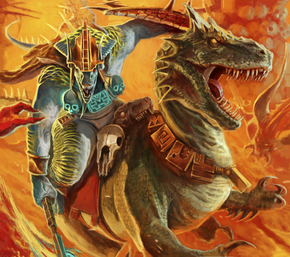 Saurus Scar-Veteran riding upon Cold One.

Saurus Scar-Veterans are the frontline commanders of the Seraphon army after having risen through the ranks after many battles.[2a]

As a saurus survives more battles, they become skilled in not just personal combat, but also in the art of leadership, and their command of battlefield strategy grows more instinctive. Although they may not be able to explain the specifics of a refused flank or defence in depth, a saurus leader will intuitively recognize when they are required to achieve victory. They impart their will to those Seraphon under their command with a series of growled commands, reorganising cohorts and launching feinting attacks to ensure the destruction of their Starmaster's enemies.[2a]

Despite their role as commanders, the Scar-Veterans remain peerless killers. As they age their scales harden and ossify, while already phenomenal strength is further enhanced by thick cords of muscle. Scars will criss-cross their bodies, each mark representing one of their countless defeated foes, and a primal aura surrounds them that cows beasts and fellow Seraphon alike.[2a]

As the frontline commanders of the Seraphon army, each Saurus Scar-Veteran is given a control of an assemblage of cohorts, and occasionally even entire armies. They possess the innate ability to rouse the primal ferocity that lurks within the heart of their saurus kin, unleashing these instincts at just the right moment. Although a Scar-Veteran would have already survived enough battles gain leadership abilities, should they survive long enough they will eventually rise to the rank of Oldblood. In times of war all Seraphon, and even the to some extent the slann, defer to the authority of the saurus spawn lords.[2a]

Although saurus can speak, the vast majority are far from talkative and capable of producing only monosyllabic grunts. However, saurus commands have slightly expanded vocabularies, though these are still only related almost exclusively to matters of war their simple, but effective, culture of strength. Disagreements are possible between saurus leaders, but they are settled through ritual combat rather than debate, for all instinctively know that authority is granted by deeds, not words, amongst the saurian legions.[2a]

Only the mightiest of saurus can possibly tame the fearsome Carnosaurs and ride them into battle. When a Carnosaur joins a battle they enter a terrifying blood-frenzy, and only the domineering will of the saurus lord atop them directing them towards their prey.[2a] Scar-Veterans may also be found riding atop Cold Ones.[3a]