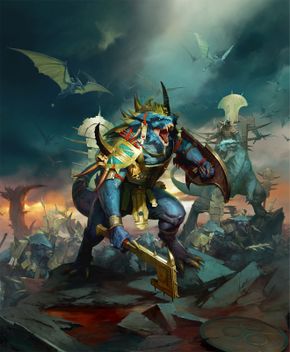 Saurus Oldblood on the front lines of battle.

Saurus Oldbloods are Saurus veterans of many wars that act as generals in the Seraphon armies.[1a]

Saurus Scar-Veterans, the frontline commanders of the Seraphon army, will over time rise to the rank of Oldblood should they manage to survive that long.[2b]

These Oldbloods act as the generals of a constellation's military forces. With an innate understanding of warfare they are master tacticians and are also among the deadliest of Seraphon, Oldbloods have such an aura of command that other Seraphon instinctually react to the will of the Oldblood. Those Seraphon close to the Oldblood are driven to a state of focused aggression creating a savage wave of Seraphon that fight with the disciplined fury of the Oldblood. [1a][2b]

They fight with weapons of star-forged Celestite and tear and rend their foes with tooth and claw.[1a]

They are often entrusted with their temple-city or fleet's most sacred war relics. Such relics may include gauntlets that blaze with a killing light or spears that crackle with the contained energies of suns.[2b]