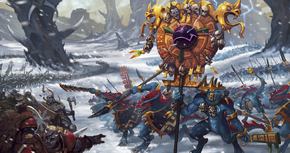 Saurus Astrolith Bearers are Saurus warriors that bear an astrolith into battle. An astrolith's bearer is not necessarily the greatest fighter amongst a Constellation nor its most capable general. They have, however, been deemed by the Slann to possess a great destiny, and as such are gifted the astrolith.[1a]

Whilst the Saurus are not prideful creatures, being prescribed to carry such treasured relics by the Slann gives them a great deal of satisfaction. As such, they mercilessly slaughter any who approach them, whilst keeping their icon raised high. [1a]

An astrolith is a disc of glyph-inscribed Celestite, dominated in its centre by a mysterious globe. Many of the tools of the Old Ones arouse curiosity amongst the Seraphon, but few are as intriguing or inspiring as these strange devices. They are capable of channelling celestial energy in vast quantities, unlocking hidden chambers and Realmgates by being inserted in specific places of power. The winds of Azyr blow strong around it, and the Seraphon who tap into this energy find their powers greatly enhanced in the icon’s presence. [1a]

Astroliths are often utilised by the Starborne; the process through which a slann 'conjures' their warriors into existence – in reality, drawing them forth from a temple-ship – is accelerated while in the presence of one or more astroliths, more powerful reptilian creatures taking shape from Azyrite magic as the icon's glyphs glow brightly. [1a]