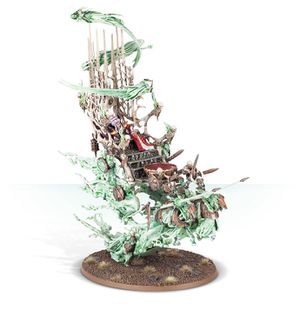 A Sanguinarch on her Bloodseeker Palanquin

Sanguinarchs are honoured Soulblight vampires that have become obsessed with the consumption of blood and seek only the richest and most potent blood to sample.[1a][3a]

In the Mortal Realms they are also known as Bloodmothers or Red Widows and are often embedded deeply in mortal society as eccentric aristocrats or famously wealthy socialites. They can spend decades or even centuries manipulating mortals to produce the perfect bloodline that generates a special flavour in their ichor. [1a]

They may also sake their lust for that unique or special blood on the battlefield, collecting the heady blood of warrior champions, noble lords of battle or rulers. They ride upon luxurious thrones, Bloodseeker Palanquins carried aloft by spectral bearers, heralded by the screams of banshees bound to its structure. These may have been rivals or favoured servants but now they hate the living as much as they do their creator, slicing them to pieces to slake the lust of their mistress or master.[1a]

As they ride to battle, they may gift Soulblight kinfolk with draughts of their chosen blood vintages, driving their bloodlust even higher.[1a]

The Adevores are Neferata's favoured Sanguiarchs who make intoxicating brews that can only be drunk by the high members of her court.[1c]

Inevitably the Sanguinarch is a Wizard able to conjure a Mystic Shield, an Arcane Bolt or simply drain a torrent of blood from a victims mouth, nose and eyes with a Blood Syphon spell. [3a]