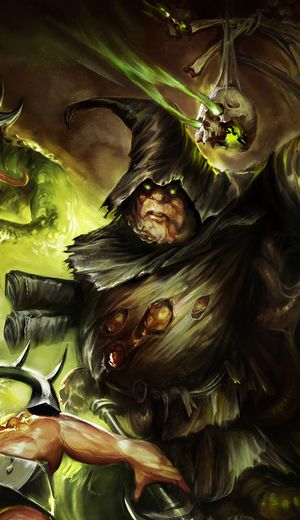 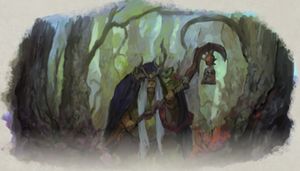 Rotbringer Sorcerers are Nurglite magic users of the Rotbringer armies. Their god often sustains them in battle, by blessing them with vitality, the support of their master brings them great joy and makes them chuckle with glee. Always eager to share and spread the gifts of nurgle.[1a][2a][3]

They usually begin as well-meaning shamans or wizards that, seeking to expand their knowledge or gain greater power in the fight against chaos, damn themselves. Otherwise, Sorcerers damn themselves by avarice and lack of caution, inhaling one too many lungfuls of corrupted spores, or uttering a cursed incantation. Of course, many Sorcerers rise from the ranks of the myriad mortal tribes, willingly pledging themselves to the Plague God in exchange for his bountiful and unnatural gifts. Although a Sorcerer may lead a Contagium to war, many prefer to act as twisted counsel to their Lords of Nurgle, all whilst advancing their own schemes. [1a]

Rotbringer Sorcerers wield the powers of decay, entropy, and putrefaction. With a string of blubbered, guttural curses they can turn their enemies blood to brackish filth, conjure flesh-eating plagues, cast withering hexes, blow out clouds of flies from their mouths. They can also shield their allies with roaring clouds of flies or bless them with bountiful poxes that bloat their bodies with rancid fat and thicken their hides to make them near immune to harm.[1a][2a]

They can open their mouths wide and vomit torrents of disease, filth and unnatural foulness. This Stream of Corruption is created by channeling the foulness of their god and is so powerful they can drown or wash away those not killed by the infections in the stinking slurry.[2a][3]