From Age of Sigmar - Lexicanum
(Redirected from Realm of Shadows)
Jump to: navigation, search 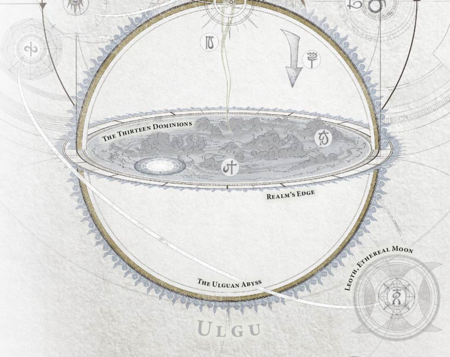 The Realm of Ulgu

The Realm of Ulgu consists of thirteen individual regions - each one is said to be full of riddles and secrets and all are rife with dangerous illusions.[1]

The Sword of Judgement

The Rune that is used to represent the Realm of Ulgu is the Sword of Judgement, a reminder to all - noble or peasent that none can escape its judgement and the sword is often the weapon of choice of warriors of this realm. [18a]

Malerion awoke fully formed in the Realm and wondered alone across the thirteen domains of Ulgu, but he found no other aelves. At last he encountered a kabal of shadow-daemons and at centre of the revels was finally a familiar form - Morathi, his mother from the World-that-Was. Although their reunion was anything but joyful, they reached an uneasy truce and joined other deities in the Great Alliance that was being formed by Sigmar.[1]

The Realm became aa sanctuary and home of philosophers and dreamers.

When Sigmar opened the gates of the Realm of Azyr, the shadows shifted enough that Sigendil, the High Star was able to be seen. Pillars of energy burst from Ulgu's skies to throwh light where it had never been seen before.[1][1a] 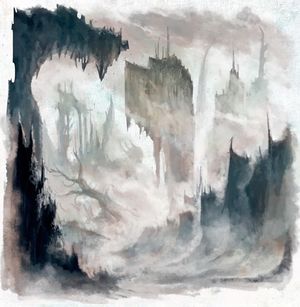 The Realm of Shadows

Lands near the centre of the realm are reasonably inhabitable, although often shrouded in darkness but as one travels towards the rim they become every more strange and outlandish with vast oily swamps, bleak wastelands, floating temples and gaiste-mazes full of questing-vines and Shadow Daemons.[18a]

Each of the Thirteen Dominions remain fully independent and each is comprised of many competing kingdoms bound together by webs of intrigue and political manipulation - all as Malerion and Morathi will it. [19a]

The people of the Realm are known for their skill as hunters, stalkers and assassins - often having razor sharp senses to penetrate the dangerous shaodws and gloom that shrouds the lands. They have a reputation for being are both suspicious and also untrustworthy, secrative and prone to reflecting deeply on life and existance. [18a]

The Realmsphere Magic and spells associated with the realm of Ulgu are known as Grey Spells.[19b][19c]