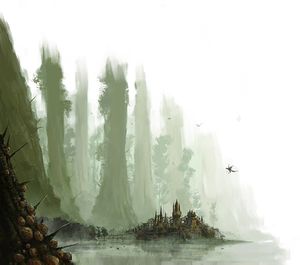 The Realm of Ghyran, also know as the Jade Kingdoms or the Realm of Life, is one of the eight Mortal Realms. It's a bounteous realm forever flowing in cycle and the most verdant of lands when blooming. The life in there was everywhere and innumerable shapes, spreading with a hunger that defied all logic. It has countless emerald gardens filled with verdant life of every kind, lush valleys, babbling streams and glittering mountains. The skies are covered in tangling canopies, vast clouds of spores, shattered husks of sky-islands and storm-reefs. The entire realm responded to the eternal song of Alarielle, her voice echoing from every corner of the realm, except where darker gods held sway.[1][2][8a]

Ghyran is a realm besieged by Nurgle's followers, seeking to claim the Realm for Grandfather Nurgle.[2] At the dawning of the Age of Sigmar the entire realm had almost been completely corrupted by Nurgle's tainted influence, turning it into a pestilent and corrupted plaguescape. It very nearly became an extension of Nurgle's Garden within the Realm of Chaos. Only a few regions contained hidden wellsprings of uncorrupted life magic, like the province of the Ivy King, the Skyfalls of Rhyros and the kingdom of the Greenglades. [6][7c]

Rescued from the followers of Nurgle, Alarielle the Goddess of life has been reborn into a new war-like incarnation to turn the tide against the forces of Chaos.[6]

The ancient laws of Alarielle forbid logging in the realm, which is strictly enforced by the Sylvaneth, forcing cities to import stone and timber.[8b]

The Coil of Life

The Rune that is used to represent the Realm of Ghyran is the Coil of Life, Inhabitants often inscribe it as a tattoo or tribal marking whilst menhirs, waystones and talismans often bear the sigil. [21]

A reality of never-ending bountiful life. The realm of Ghyran is a place embodying life in harmony, forever turning in a circle of beginnings, endings and new beginnings. The embodiment of life, growth, fertility, fecundity, birth and rebirth. The realm teems with countless forms of flora and fauna, as well as many different kinds of magical beings and spirits of life.[21] [22]

Indeed, even the earth, air and stones are alive with the energies of life and the vast super-continents themselves mate with one another to birth new lands.[21] [22]

Aqua Ghyranis, the sacred water of Verdia is known for its life-giving, super nourishing properties. It is even able to purify and remove the taint of Chaos that plagues the Mortal Realms and it's peoples. It has also steadily become a currency favored in the cities and markets of the Great Parch.[22a][26a]

The peoples of Ghyran are called as Ghyranites. They are known to be a pragmatic and forward-thinking people who revel in life magic. They tend to integrate the natural world into their settlements, either by using magic to shape various woodlands, forest or jungles into defensive walls and buildings. Or by building great garden districts and cultivating plant life within cities made of brick and stone, merging civilization and nature. With Greywater Fastness being the only known exception.[21] [22]

Fashion in the realm is represented with colors often associated with Ghyran. Browns and greens are common, But other colors are known to be favored, such as the yellow of spring roots, red and orange of autumn, white and icy blue of winter. For the turning of the seasons effects this realm more then others.[21] [22] 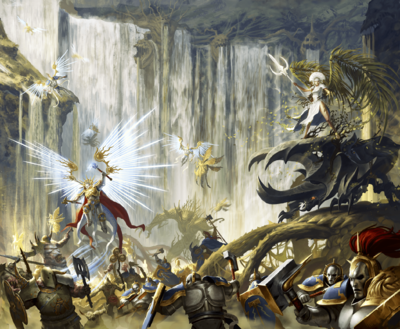 The goddess Alarielle creates the Sylvaneth, sowing soul pods singing the Spirit Song as she did so, which still echoes and guides her children. [6] 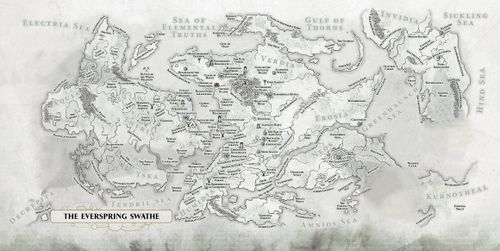 Lands of the Everspring Swathe

A swampy region inhabited by bog-grot tribes, before its resources were plundered to build the Greywater Fastness, including a deposit of Ghyran Realmstone that made the city possible. Due to the deforestation in this area caused by the expansion of the city, the sylvaneth came to blows with their allies.[4c]

Jade Kingdom of the Greenglades

A woodland realm that came under repeated attack by the forces of Nurgle in the Age of Chaos, sickness rolling in with disease tainted fog banks.[7d]

The Phoenicium is an ancient metropolis suffused with the power of Ghyran and stands as a symbol of rebirth.It's found at the base of the Arborean Mountain.[3]

The Realmsphere Magic and spells associated with the realm of Ghyran are known as Jade Spells.[26b][26c]