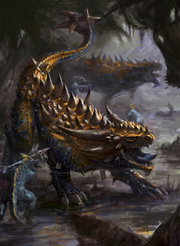 Razordons are territorial reptilian beasts that make their nests in areas suffused with Azyrite energy and live in packs.[1a]

Razordons are large reptiles with spines running the length of their backs, hides with thick scales, and clubbed-tails covered in spikes. To defend themselves, they can flex the muscles on their backs, firing the spines at their foes. These spines can rapidly regrow, once the Rzaordons return to their nests, which are always found in areas rich in Azyrite energy.[1a]

Found in the primordial jungles and wildernesses of the Mortal Realms, these immense reptilian creatures are renowned for being incredibly territorial and making their nests in locations saturated with Azyrite energy. They are one of many creatures that can often be found in Seraphon territory.[1a]

Even those Razordons used by Seraphon are intensely territorial and their handlers have learned to announce themselves before approaching, lest they become pincushions for the spines fired by the cantankerous creatures.[1a]