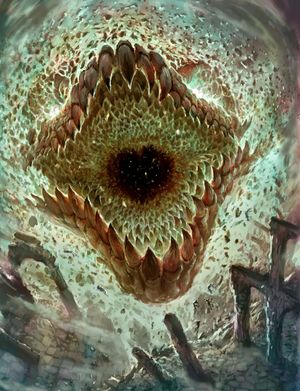 Ravenak's Gnashing Jaws is a predatory Endless Spell of Ghur manifesting as jaws with an insatiable hunger that exist only to hunt and devour any living creature they can catch. It is believed that the victims of the spell are fed to the ever-hungry monstrosity known as Ravenak that lurks in darkness in the Realm of Ghur. [1][2]

A wizard can use the bestial magics of Ghur to give shape to a razor-fanged avatar of the eternally voracious Ravenak. The air swirls and swiftly congeals and with a ground shaking birthing roar wisps of amber-hued magic give shape bestial jaws filled with massive, razor-sharp teeth. That shape soon becomes a moving blur as Ravenak’s Gnashing Jaws streaks off in search of prey. [1][2]

When conjured the spell moves across the battlefield, its fangs snap greedily upon thin air with a terrible sound but nothing compared to the horror when the spell feeds on victims. The crunch of bones, the screech of rent armour and the screams of pain act as an accompaniment to the frenzied snap-clacking of gnashing and tearing fangs creating a horrifying cacophony. Bones, flesh and organs are ground into paste, sinews are snapped, and even metal is ripped apart like cloth while bloody hunks of flesh and bone are sent outwards in a gory shower. What is consumed is swallowed in impossible gulps and disappear into the mouth’s swirling amber energies. The path of the spell is marked by a gruesome trail of dismembered limbs and streaming entrails with still twitching body parts causing even the hardiest of veterans to feel nauseous. [1]

When summoned in the Realm of Ghur the spell is enraged by the frenzied energies of the Realm of Beasts, causing the jaws consume more and more.[2]