From Age of Sigmar - Lexicanum
(Redirected from Ravagers)
Jump to: navigation, search 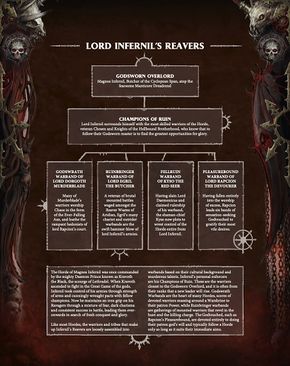 Ravager Horde are the most numerous Hordes of Slaves to Darkness that spread across the realms in their lust for conquest. There is often little subtlety in their tactics or aims, but this is no impediment, for their skilled warriors rejoice in meeting any challenge with cold steel. Those who fall are soon replaced, for many savage tribbes are drawn to the warpath of a Ravager Horde, eager to share in the spoils of their pillaging and victories. More so any other type of horde, Ravager hordes tend to contain many powerful champions vying for control; often these figures possess a shared background. For example, the Graven Fang tribe is rules by three sister-Warqueens. It is the tragedy of Chaos, however, that eventually these champions must slay one another to ascend the Path to Glory. Only one can rule, and all who stand in a champion's way must be removed, lest divine favour falls on them instead.[1a]