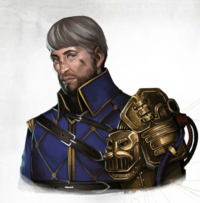 Captain Terzo Heinz, whose left arm was replaced by a Rattlebone Prosthesis

Though Rattlebone Prostheses can replace lost fingers and limbs well enough, they are bulky, powered by expensive Realmstone, need constant maintenance, and are not nearly as customizable as other prosthetic options, like the Medimantic Appendages created by Cogsmiths.[1a]

Rattlbeone Prostheses were developed sometime after the Rattletrap boom. Enterprising Steam Lords of Greywater Fastness adapted Rattletrap technology to create these bulky prosthetics to replace limbs lost by workers and artisans in factory accidents. This was far from a benevolent undertaking, as it gave the factory bosses the tangible benefit of having valuable employees return to their workshops and factories.[1a]