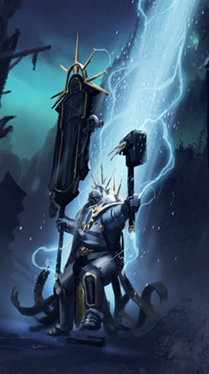 Ramus of the Shadowed Soul

Ramus of the Shadowed Soul is the Lord-Relictor of the Bullhearts, a Warrior-Chamber of the Hallowed Knights Stormhost. [1a]

Stories are often told in the feasting halls of Nordrath and Azyrheim of his relentless pursuit of Mannfred von Carstein. [1b]

When the vampire Mortarch was captured during the reclaimation of Caddow, he at first urged that he be immediately destroyed to prevent him escaping or charming his captors. [1c] Later Mannfred, still a captive, offered Ramus a chance to free Tarus Bullheart from his own imprisonment by Nagash, pledging to lead Ramus to Nekroheim whilst the Lord of Undeath was distracted. [1d]

Although he released Mannfred, Ramus forged an enchanted silver nail that he hammered into the vampires body, just short of his heart, pledging that should he betray them it would pierce his heart and destroy him. They then set off for the docklands. [1e] Osanus and some thirty veterans of the Bridge of Seven Sorrows joined him, making an ancient dust-barque ready for the journey ahead across the Sea of Dust. [1f]