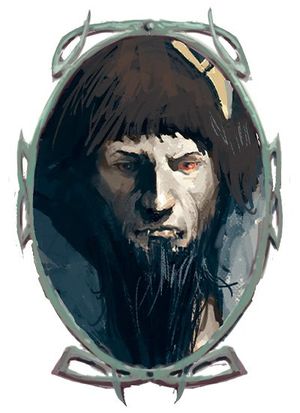 Portrait of Radukar the Wolf.

Radukar the Wolf is a large Vampire Lord who rules the city of Ulfenkarn.[1]

As a Mortal, Radukar was a fearsome and savage warlord operating alongside the coasts of Shyish from his flagship carrack Impaler's Gift. To prove himself worthy of the Blood Kiss, Radukar raided the tomb of the ancient vampire emperor Morkan and slew Vilnas, the double-headed wolf which guarded the tomb. He then claimed an ancient ensorcelled barrow-blade as his personal weapon and was changed into a vampire.[3]

When the city of Mournhold was invaded by the Khornate Daemon Prince Slaughn the Ravenor, Radukar arrived with a fleet containing a company of Kosargi Nightguard ogors and liberated the city from Chaos's grasp, becoming heralded as the city's saviour. Radukar became the city's ruler and joined Ulfenkarn's ruling nobility. As an Vampire Lord, he received a steady offering of blood alongside a coterie of fiends and lackeys known as the Thirsting Court, taking up residence in a castle known as the Ebon Citadel.[2]

Upon the detonation of the Necroquake, Radukar and his followers gained immense necromantic magic and became power-hungry, loosing all restraint and turned against the nobility of Mournhold, feasting on any of his enemies who might defy him and turning a few survivors who would join him.[1] The city the became renamed as Ulfenkarn, the Wolf's Feast.[2]

At some point Radukar crossed paths with a Human named Emelda Braskov from Mournhold and destroyed her army.[1]