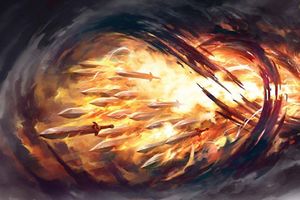 Quicksilver Swords is a predatory Endless Spell made of the realm magic of Chamon manifesting as swords that slice through the air as they fly towards their quarry, piercing armour, scale and flesh. These blades are held by clouds of metallic vapour blown by an unseen wind which grows even more blusterous in the presence of Chaos. It is said that the Quicksilver Swords were wrought by the banshee Celemnis who imbued her creations with a portion of her body and soul by casting a single hair from her own head within the heart of each blade allowing them to cut through metal, flesh and bone as well as through the souls of those they struck.[1]

When the conjurer incants the dying promise of vengeance against the forces of Chaos incanted by Celemnis, a dozen of her most finely wrought blades slice their way into the realmsphere to assail the conjurer’s enemies.[2]

After the summoning the spellcaster sends the Quicksilver Swords straight into the heart of the enemy as a volley of blades which cut through the enemy lines, severing both limbs as well as their spirits from their bodies with startling rapidity and efficiency, and seemingly possessed of vengeful purpose. Ordered infantry formations are reduced to piles of corpses and severed limbs and the storms grows in ferocity in the presence of the servants of Chaos . In the realm in which they were forged they move with even greater speed as the embedded spirit of their creator drives them to fell those who trespass upon her homeland. Yet the summoner of the blades must be constantly wary as their edges cut both ways and will quickly turn upon any who stray too near.[1][2]

Each of the Quicksilver Swords bear the hallmarks of Celemnis’ exquisite artisanship and an eerie wail like a a grief-stricken howl similar to those echoes through the shattered streets of Elixia intermingles with the dying gasps of those struck down by the blades . Many believe the Quicksilver Swords seek still to avenge the death of their creator, but without eyes or ears they can only lash out violently at all in their path while others say that the Shyish necroquake has freed Celemnis from the bondage of death and the blades are guided by her. The Duardin who see in the quality of these magical blades a prize whose worth is beyond measure and believe each of the swords is destined to be used by a great warrior. Even though the unworthy may attempt to capture them the blades are nestled within seams of airborne aether-gold, which stir them into action against those with greed in their hearts.[1]