From Age of Sigmar - Lexicanum
(Redirected from Quarreler)
Jump to: navigation, search 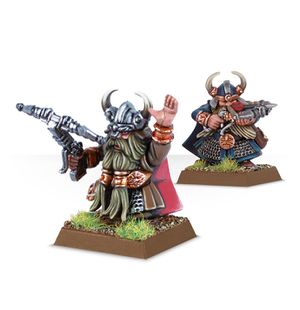 Two Quarrellers, with the one on the right being a Veteran.

Quarrellers are Dispossessed Duardin that are determined and set in their ways, granting them with a physical and mental durability that makes them steadfast fighters. They attack by firing their crossbows in volleys. They are led by Veterans and supported by Standard Bearer and Drummers.[1][2]

Quarrellers are armed with Duardin Crossbows, Ranger's Axes and Duardin Bucklers. Those units equipped with bucklers can form a shieldwall. Standard Bearer carry Runic Icons, which protects units from spellcasting, or a Clan Banner, which increases morale and diminishes the effects of the horrors of war.[2]