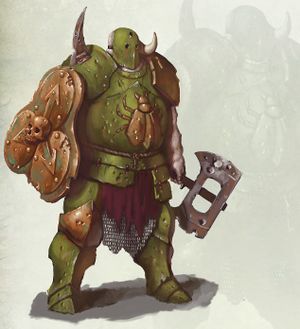 Putrid Blightkings are enormous bloated warriors, festering with pustules and plagues, and some of Nurgle's most favoured mortal servants. These rotting, bellicose murderers, blessed with the bite of daemonfly, lumber into battle with their tocsins tolling.[1a][1b][2]

They are lead by Blighlords, blessed with greater resilience, and supported by Icon Bearer and Sonorous Tocsins.[1a][1b]

Blightkings have rotting bodies that can absorb tremendous amounts of punishment allowing them to relentlessly push through a foes battleline. Their bodies can also release virulent discharges that heals those aligned with Nurgle and infects with dangerous illnesses those that don't.[1a][1b]

They wield, with a shockingly deceptive skill and speed, a variety of filth or slime-encrusted Blighted Weapons, like scythes, mauls, axes and flails, into battle.[1a][1b][2]

The Icon Bearers wield the blighted icons of Nurgle into battle, inspiring other Putrid Blightkings into fighting harder for their lord.[1a][1b]

Musicians play gigantic bells, known as Sonorous Tocsins, which are tolled to announce their charge.[1a][1b]