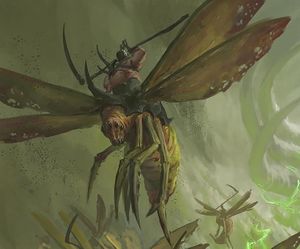 Some Blightkings, seeking to prove their devotion to Nurgle, choose to undergo a trial known as the Feast of Maggots, in which they swear a sevenfold oath to the Plaguefather at a site of particular corruption. As they do so, a Rotbringer Sorcerer will drop a slathermaggot into their open wounds. The maggot will chew through their necrotic flesh and multiply until the Blightking dies, if left unchecked for 7 days.[1a]

To avoid this fate, the Blightking will in turn infect at least seventy-seven of the worshippers of other Chaos Gods. If they succeed in doing so the maggots in their body will cease eating them, and will instead congealed into diseased muscle and fat, bulking up the Blightking substantially. It is at this point they will be rewarded with their Rot Fly mount, becoming Pusgoyle Blightlords. [1a]

Blightlords form the vanguard of the Rotbringer hosts, swooping in low over the enemy and able to shatter a battle line with a single charge. They, much like a lethal infection, tear open a gap for the rest of their kin to flow into. They also sow panic and despair ahead of the armies of Nurgle.[1a][2][3a]

They can release a virulent discharge that wounds their enemies, but heals those aligned with Nurgle.[3a]

The Blightlords have a symbiotic relationship with their Rot Fly mounts; they rarely leave the saddle and vow to protect it with their lives, and in turn, they allow the Fly to be anchored in reality without being drawn back into the Garden of Nurgle. [1a][2]

These mounts are revolting insects with 4 brittle wings that drizzle foul fluids onto the battlefield below them. They are both bloated and spindly, attacking with their spindly lashing limbs, venomous stings and fanged, foul mouthparts.[2][3a]

They wield massive, filth-encrusted Blighted Weapons, like scythes or tridents, and can also be armed with heavy bells known as Dolorous Tocsin. Blightlords have poles on their back with either a cloth banner, an icon of Nurgle or an impaled cadaver with an expression of agony.[2][3a]