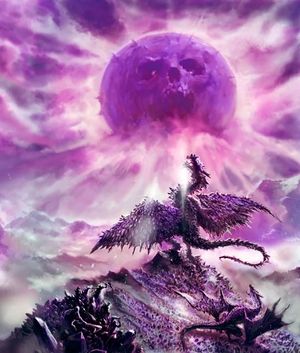 A Purple Sun crystallizing everything on its path.

The Purple Sun of Shyish is a Shyishian predatory Endless Spell that manifests as a amethyst burning skull-faced sun that radiates finality itself and is often called the ultimate expression of the Realm of Death, the physical embodiment of ending and lifelessness.[1a][1b]

A desperate or foolhardy wizard can summon the Purple Sun by uttering dread incantations of ancient days. As the spell is summoned air grows chill and the wind rises as fell energies swirl and coalesce while wild beasts cringe and howl. When the fully manifested, it solidifies into an orb that throbs with malevolent power.[1b][2]

The Purple Sun hovers menacingly, a roiling sphere of arcane force that rolls across the skies while emitting amethyst rays that drain the of life of living things and their spirits are ripped away while the bodies are painfully transformed into unmoving crystal. Size and strength, status and power all mean nothing beneath that unnatural light as the tiniest insect to the largest of beasts fall victim to its amethyst rays. Even those that witness the skeletal face of Xereus leering out from the orb are filled with mortal terror.[1b][2]

Like all living magic the Purple Sun is impervious to physical attack and no tempest can slow its advance. Only when the binding magics that created it are picked apart by the considerable efforts of a wizard will it break apart. However this causes the orb making one final attempt to reduce the life-spans of those around it. As the sun’s energies are pulled apart, its mouth opens grotesquely wide, and it emits a defiant death-scream which is said to reduce the years left to them reduced and made unhappy while their dreams haunted by the echoes of the Purple Sun’s demise.[1b]

The effects of the Purple Sun is at its deadliest when summoned in the Realm of Death.[2]