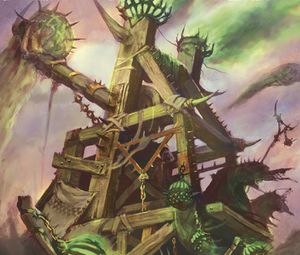 The Plagueclaw are the rickety and precarious warmachines of the Plague Monks of Clans Pestilens, used to launch toxic sludge from long-range at their enemies. It comprises of a huge timber frame with several wheels of different sizes, bolted together with metal rivets an places and tuned by cogs and screws. The catapult is a large timber beam with a metal claw that holds toxic sludge at one end and a large chunk of warpstone in the other that acts as a counterbalance.[1]

They are seen by the Skaven of Clans Pestilens as holy instruments of the Horned Rat, thus many see it as a blessing to crew one of these weapons. They become saturated with to the point that after their deaths they become one with the Great Corruptor resulting in many shedding their clothes to expose themselves to the plagues thrown by the catapults. [2]

The Plagueclaws are lacking in accuracy but this is of little concern as they only need to hit the general vicinity of targets to cause an epidemic among their ranks which may eventually infect entire nations. [2]