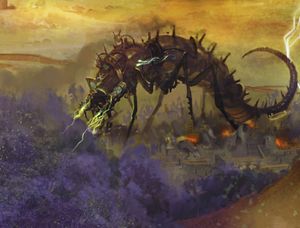 One of the Parasite Engines in the Scabrous Sprawl

Parasite Engines are vast walking city-warrens created by the Clans Skryre[1a] from the underground semi-liquid warpstone[1c] to conquer and corrupt the Scabrous Sprawl safe from the predating Gargants, each populated by skavens of it's creator clan and the Clans Verminus. These followed geomantic lines to extract nodes of Warpstone and other subterranean riches leaving behind underground factories and glowing craters, the land tainted and writhing in ruin at their passing.[1a]

Each is a many-legged, segmented abominations powered by enormous warpstone furnaces fuelled by miner-claws and deforestation maws. The chief Warlock Engineers of each of these machines compete with their rivals by creating bigger and more powerful designs. Each has unique feature, with the likes of the Drill-Stabber being a mix of rat and mosquito while others like the Scrabble-Chewer was a city made to crunch through bedrock.[1a]

They are named that way for their rapacious plunder of the living lands.[1a]