From Age of Sigmar - Lexicanum
(Redirected from Orcs & Goblins)
Jump to: navigation, search 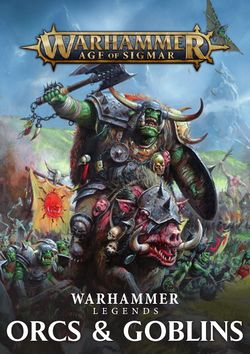 The Cover for the Orcs & Goblins Legends Compendium

Orcs & Goblins are an army originally from the Warhammer: Fantasy Battles that was broken down into many factions for the Grand Alliance of Destruction when it transitioned into Warhammer: Age of Sigmar. The army would later be re-released with Warhammer Legends, with warscrolls for every Citadel miniature Games Workshop has released.

When a greenskin horde descends upon the land it leaves little in its wake save devastation and ruin. They raid ceaselessly, carrying war and barbarism to every corner of the world under the resounding roar of their Waaagh!. Time and again, Orc and Goblin armies arise without warning, their direction and intent dangerously fickle and unpredictable, but with one surety – that nowhere is safe from their attacks for long. These loose confederations of squabbling tribes are commanded by an especially powerful and ambitious Warboss, and amount to raucous mixes of greenskins and other violent-minded creatures.

In the Mortal Realms their units exist in the following factions: 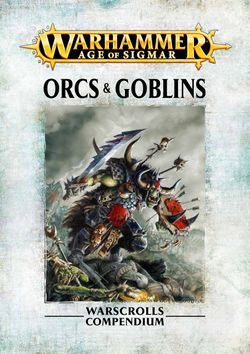 Nothing slaps a grin onto a greenskin's face like a good bit of smashing stuff up. Whether thuggish orruks or sneaky grots, drunken gargants or dumb-asrock troggoths, all live for the day the Great Waaagh! is declared. Part holy crusade, part anarchic riot, the Great Waaagh! sweeps across the realms laying waste to all in its path. So do the greenskins worship Gorkamorka, through total destruction and indiscriminate mayhem.