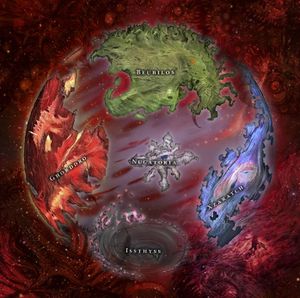 The Orb Infernia is a moon that hangs over Aqshy. A world unto itself, it hangs above the Flameworlds. Over the centuries, after it was conquered by Chaos, its oceans boiled away, leaving fragmented lands bound together by the hatred of the four daemon princes who rule them.[1a] The four princes are collectively known as the Tetrarchs. The Slann Starmaster Lord Xen'phantica also dwells on Orb Infernia, secretly ensuring that the daemon princes and their legions do not escape.[1b]

Orb Infernia has its own nature that make its natural flora and structures to be dangerous for daemons, corporeal form of which can dissolve upon contact with such terrain. Interesting, that mortal creatures not only totally unaffected by this obstacles but even can pass through them without hindrance and harm.[1f]

Long ago, Orb Infernia was a grand sky-kingdom. The people who dwelled there were miners and artisans who traded with other nations, and were famed for the grandeur of their visits to the realms below the Orb. The land was abundant in mineral wealth and precious jewels. Orb Infernia's monarchs and merchants enjoyed dazzling wealth and brisk trade.[1b]

For his own dark amusement, Archaon gifted Orb Infernia to four troublesome daemon princes, telling each one that they alone were meant to rule and thus sparking a conflict that has lasted centuries.[1b] Since that time Orb Infernia is saturated with a powerful storms of wtheric turbulence. These prismatic winds are anathema for all pure creatures and people and nourishing and empowering thing to daemons and corrupted men. Only the absolute purity of seraphon made them immune to this chaotic winds.[1d]

The Slann Starmaster Lord Xen'phantica came to Orb Infernia and closed the God's Eye, the Realmgate that connects the Orb with the Ashlands below. For centuries the Slaan carried out a secret war against the four daemon princes, using manipulations and well-timed attacks by his seraphon constellations to constantly turn them against each other in order to ensure they would not unite and escape Orb Infernia.[1b]

The agents of Archaon revealed the presence of Lord Xen'phantica to the daemon princes. The daemon prince of Tzeentch, Zyrrak Mirrorkin, forged an alliance with the other daemon princes and convinced them to assault Nugatoria where the Slaan could be found. The alliance rapidly fell apart during the assault on Nugatoria due to infighting among the four princes, and the Slaan was able to outmaneuver the daemons and send them away in defeat.[1c]

As part of his scheme to capture the godbeast Ignax, Archaon had his Gaunt Summoners transport Korghos Khul to Orb Infernia, luring him to attack the daemons there. Khul led his Goretide on a rampage in Ghorddro, where Khul fought Skinskein, daemon prince of Khorne, for the right to lead the Khornate armies. Khul cut open Skinskein's throat, bleeding him of all his daemonic power and causing him to revert back to a mortal human form before Khul crushed his skull and claimed his legions.[1e]

Khul led his Goretide across Orb Infernia in a months-long campaign of conquest, destroying everything that would not serve him. Khul's armies clashed with the seraphon, each victory drawing more of Orb Infernia's daemons to his banner. Khul ultimately led the combined hordes of Orb Infernia against Xen'phantica, slaying the Slann and opening the God's Eye.[1e]

Just as civilization reestablishes itself, the Orb Infernia becomes the power-base for Korghos Khul and his Daemon Legions, raining blood onto the land below whenever Khorne's forces muster a counter-offernsive.[3b]

Though Khul was fully rejoiced by his victory, during the Time of Tribulations when Nagash awakened and sent the Red Mists upon the Orb Infernia, time was reversed by the forces of Order with the ancient Infinity Gears, and Xen'phantica, his army of Seraphon, and the clashed daemon princes with their daemonic armies all were fully restored. In one shot of the temporal weapon Khul's victory was undone.[2a][2b]

Orb Infernia is divided into five major regions. The powers of Chaos have engulfed the entire realm, causing the regions themselves to battle one-another, with living mountains of hateful stone, rivers of blood like giant serpents, and fanged caves devouring any who enter them.[1b]