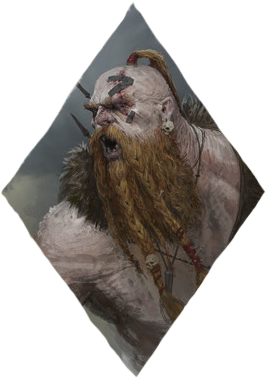 One-Eyed Grunnock - previously known as Grunnock Battle-krasha - is one of the most famous Warstomper Mega-Gargants in the realms. Bathe Gargant attained his signature single eye on the day he had attacked the Ossiarch Bonereapers settling Ghurish Necrosia. This assault happened just days after the Kharadron Overlords had sought to oust the undead from their Ivory Citadel atop its high plateau. At the time of the attack, the Kharadron and Ossiarchs had reached a stalemate, and their leadership had begun to make a treaty revolving around the Kharadron controlling the skies - and the aether-gold that came with it - whilst the Bonereapers laid claim to the bones of the land. As they were finalising the deal, however, Grunnock was already climbing the plateau’s sheer sides. Atop the cliff he laid about himself with abandon; such was his reach that both sides soon learned to avoid his wrath, but not before he stamped flat the Kharadron Admiral and the Ossiarch Liege as they were making their final treaty. [1a]

The Gargant was driven off with an aethershot cannon fusillade, which took his eye and split his head open; he fled soon after, but the damage had been done - pact was forgotten and Ghurish Necrosia continued to be beset by war. Grunnock has found a dozen new wars since, taking coin from all and sundry and venting the wrath of his skull-splitting headache on any army he can find. [1a]