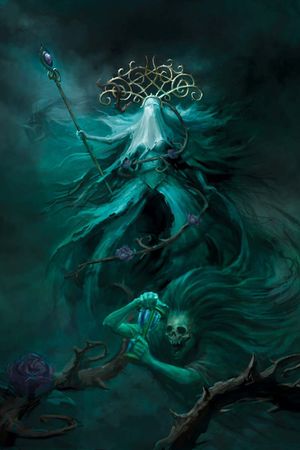 Lady Olynder, the Mortarch of Grief. 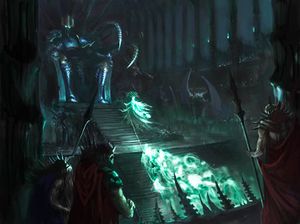 The Mortarch of Grief before Nagash's Court.

Lady Olynder is the Mourning Bride, the Veiled Lady, the Unrequited Queen, and the Mortarch of Grief.[1][2]

When she was alive, Lady Olynder was a plotter and schemer who sought to improve her status by showing false remorse. Now, as the most recently created Mortarch she serves Nagash by commanding the Nighthaunt legions.[1]

Her own domain is named Dolorum.[4a]

As a mortal she had been a famous beauty, renowned throughout the empire of Dolorum in the Realm of Shyish. She had propelled herself ever upwards through society using schemes and her charms and leaving a trail of broken hearts and corpses. Finally she became betrothed to the future king of the empire who with his father, also suddenly disappeared – leaving her to rule alone. [3a]

She hid her joy behind public displays of grief and her veil which lead to the sobriquet of the Mourning Bride. However the empire was soon after assailed by the plagues of Nurgle and all her living subjects began to perish and at the last she herself tried to bargain with the agents of the Chaos god. [3a]

Finally at this point, Nagash himself intervened and transformed her into a spectre that would haunt the ruins of her own lands, weighed down with the sorrows of the dead of the Mortal Realms – he then turned his attention elsewhere. [3a]

Olynder however did not accept her fate and rose again to command all the many Nighthaunts that swarmed across what had now become the Screaming Wastes. [3a]

Nagash sought a new Mortarch who would both instil and understand fear, a notion that he himself had forgotten and whose power he now sought to unleash upon his many enemies. He returned his gaze to the Veiled Lady and discovered that the Necroquake had invigorated her further and now she sought to conquer further lands of both the living and the dead. [3a]

Impressed, he granted her a tiny portion of his own divinity and crowned her as the Mortarch of Grief, ordering her to gather and unite the Nighthaunts of his realm and lead them against the foes of the lord of the undead. [3a]

Lady Olynder summoned a great horde of the spirits at Nagashizzar, granting command of portions of it to a number of the Knights of the Shroud. As new aftershocks reverberated from the Necroquake, she unleashed her armies [3a] – a hundred Nighthaunt Processions enter battle alongside the armies of the dead and the other Mortarchs take their measure of their new peer. [3b]

She attacks the forces of the Chaos warlord Thur in the Underworld of Lyria quickly wiping the majority of his horde. At the siege of Morlaix she destroyed the Stormcast defenders, defeating their Lord-Celestant in single combat. Thur returned to confront her again, summoning the Bloodthirster Khazkhan who nearly destroyed her, the day being saved by the arrival of Arkhan and Nagash himself. [3a]

Although pleased with her work, Nagash also found her to be to headstrong and forced her to wed Kurdoss Valentian, although he would not allow him to ever rule himself. [3a]

She is possessed of such misery that it projects from her in vast, deadly waves and those who fight her often loose hope and accept the grim inevitability of death – should they have the will to fight on, they are quickly obliterated by her magic, or merely torn apart by spectral attendants.[1]

Lady Olynder is accompanied by a pair of banshee handmaidens – one bearing a gift from Nagash himself – a Grave-sand hourglass.[3c]