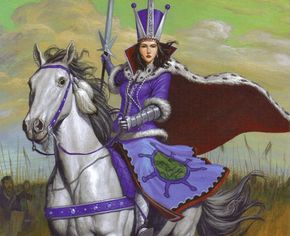 The Oighear are a hardy tribe of mages that inhabit the frozen land of the Silverglades within the Realm of Chamon. There, the Oighear have learned to harness the primal forces of the Izotz, the power of Ice. The Oighear are unaffected by the trivial pursuits of the rest of Chamon's inhabitants and have made the Silverglades their home for over countless millennia. It is thought that some tribal elders may have lived for as long as the tribe has existed, kept alive by some unseen and unnatural force. Few have seen an Oighear Ice Mage alive and lived to tell the tale, but what is known is that they can change their appearance at will. Those that have survived have reported them taking the visage of Ogor-esque creatures, lithe feminine figures and monstrous hunchbacks. However, every thousand years, when the Great Storm arrives in the Silveglades and covers the land in snow, the Oighear decide upon their new tribal leader. For this reason, the Oighear will gather aid from mercenary armies to wage war upon another in order to expel their rivals from Chamon and seize control.[1]

The Ice Mages of the Oighear are aligned with Grand Alliance of Order.[1]

The artwork and spells of the Oighear alludes the to nation of Kislev and Tzarina Katarin .