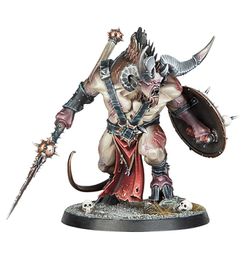 Ogroid Myrmidons are members of the Ogroid race devoted themselves to the art of combat and fight alongside the armies of Slaves to Darkness. While they lack the mystical abilities of the Ogroid Thaumaturges they are able to wield their weapons with breathtaking skill and often serve as masters of the fighting pits of the Eightpoints and those who excel under their gaze often go on to achieve great glory. Thus the warbands of the Eightpoints congregate around them to impress them with their own skills.[1a]

Ogroid Myrmidons wield spiked shields and heavy spears. Runes are carved around their body that glow with a hellish light when wounded to empower them. [1a]