From Age of Sigmar - Lexicanum
(Redirected from Oakenbrow)
Jump to: navigation, search

The sigil of Oakenbrow has long been associated with the mother goddess herself, and by connotation guardianship and authority. It is a symbol recognised by Sylvaneth throughout the Mortal Realms.[3] 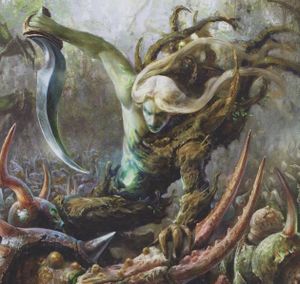 A Tree Revenant of Clan Naeth'aer at the Battle of the Greatstump.

Oakenbrow Glade are said to be the First Glade of the Sylvaneth, planted early in the Age of Myth by Alarielle herself.[1]

The spirits of Oakenbrow can be recognised by their warm but sombre colours, including foliage that is frequently crimson or reddish brown. While still natural in aspect, their clans often display more- regimented colour schemes than those of their fellow glades, taking much pride in refining their clan markings and colours over the ages.[3]

Known for their calm majesty, the Sylvaneth of Oakenbrow show great discipline and respect for ancient traditions, especially when compared to some of the more frickle spirits of their kind.[4a]

Oakenbrow is a old and vast Glade, comprised of hundreds of smaller clans, which themselves are large in size and their enclaves can be found across Ghyran and throughout the other Mortal Realms.[3]

Many of the Oakenbrow enclaves are situated on prime conduits of life magic, including sacred sites like the Silver Shimmerfalls in Neos, the Golden Confluence, the Mistwoods of Shae-Rahat and the Peakwood forest. Such is the pride of the glade and their own knowledge of the many great deeds they have performed for Alarielle in the past that even the lowliest Dryads of Oakenbrow carry themselves with great poise and solemnity. [3]

This makes High King Rhalaeth of Oakenbrow – an old-growth of immense size – one of the most powerful of Regents, and it speaks well of this vast and elder being that he is gracious and fair in his rule. Alarielle trusts Rhalaeth, and only in her most fey of moods goes against his wise counsel.[3]

They have a reputation for wholesomeness and nobility, though even some of their own kind, notably sylvaneth of Dreadwood Glade and Gnarlroot Glade also call them arrogant. They have forged strong bonds with many other races across the Mortal Realms and in particular see the Stormcast Eternals as kindred spirits. The Loremasters of the glade are also well respected for their knowledge.[1] [3]

The Oakenbrow are noted for being particularly diplomatic in their relations with outsiders – a trait that those of Dreadwood frequently point out as a weakness. It is the Oakenbrow who most favour Alarielle's renewed alliance with Sigmar, and they have fought alongside the Stormcast Eternals many times. In these storm-forged warriors, the Sylvaneth see kindred spirits, brave and determined crusaders who will die before they see Chaos victorious.[3]

After Alarielle seeded more Oakenbrow into the fertile lands of Neos, a rivalry began between them and the Dreadwood Sylvaneth who were planted in nearby Decrepita. Since the Age of Myth the two glades have clashed numerous times. Even under desperate circumstances, it is rare that wargroves from the two glades are able to fight side by side without animosities flaring and even internecine fighting breaking out.[3]

There are many Oakenbrow enclaves, each one populated by at least one large clan and oft-times more. When Oakenbrow are called to battle the wargroves they form are typically large and contain many Noble Spirits. Striding amongst their musters are an unusually high proportion of Treelords and Treelord Ancients for the elder Ancients do not slumber as often or as long as do those of other glades.[3]

Many tales are told of the tenacity of such beings, and their defiant stands in battle are legendary. It matters not what manner of weapons the foe carry, for the towering nobles simply refuse to yield. The disciplined warriors of Oakenbrow revere their clan lords, seeking their wisdom in peace and rallying around them in times of war.[3]

When in battle, the Oakenbrow fight with great honour, as they see themselves as first-born and favored of Alarielle.[4a]

Oakenbrow wargroves are blessed by large numbers of Treelords, many of truly venerable age and power and they are renowned for their resilience and unrelenting advance.[1]

The Sylvaneth of the Oakenbrow clans claim to be the First Glade – that is, that their ancestors sprang from the first of the soulpods planted by Alarielle. Some of those beings, it is said, still stride the realms today. Certainly the Oakenbrow have existed since the early days of the Age of Myth, and they survived the Age of Chaos in better shape than most of their contemporaries. [3]

In the Age of Sigmar, the glade took in the last sons of the Behemat, the zodiacal gargant and the glade joined with Ironbark Glade to defeat the Poxfang Tide, purifying a stretch of the Cascading Path.[1]