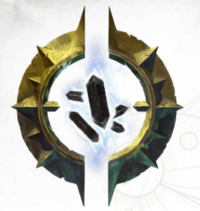 Nullstone, or Voidstone as it is known in the Kharadron Empire, is a solidified shard of the Aetheric Void which contains potent anti-magical properties that seeks to impair and consume magic and knowledge of its kind. It is an invaluable tool in magical defense. It's hunger is so potent that it can strip the mind and body of any trace of magic, leaving nothing but brain-scoured individuals in its wake.[4a] It is exceedingly rare substance found scattered across the Mortal Realms.[1a][3][7a]

Nullstone appears in the form as black stones that repel light, creating rainbow-coloured motes around it.[1a][3][7a]

Nullstone coalesces within the emptiness of the Aetheric Void, occasionally raining down unto the Realms, each an embodiment of the Void's anti-magic nature.[3]

Nullstone possesses anti-magical properties.[1a][3] It echoes with the all-consuming nothingness of the aetheric void, and even draws itself towards sources of arcane power so that it may devour them.[1] 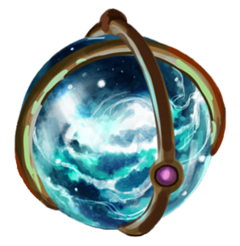 A variety of weapons can be forged from this anti-magical mineral, including arrows, axes, darts, swords, etc. This void-resonant material is proven effective against wizards. For example, a nullstone dart can reduce a master mage to dribbling imbecile.[1] Besides its use for anti-magical weaponry, it can be used for one's defence. For example, the Nullstone Vizard granted to the warriors of Har Kuron by Morathi-Khaine can shield its wearer's thoughts.[2a]

When grounded, it can be used as an ingredient for magefoil, a powerful toxin that induces intense migraines and nausea upon any victim that attempts to channel magical power.[4b]

Sometime after the Necroquake, the Battlemages of the Collegiate Arcane discovered a way to trap predatory Endless Spells in amphorae made of Voidstone. These entrapped spells can, at great personal risk, be released from their containers and turned against one's enemies.[5a]

Kharadron Overlords have an impressive suite of anti-magic weaponry, including scatter-mines made of voidstone[6a] and Voidstone Orbs, powerful artefacts used by Aetheric Navigators to disrupt the spells of their enemies.[6b]