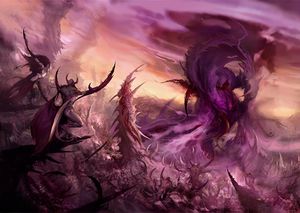 Birth of the Newborn.

The Newborn is a protean entity formed during Morathi's bid for power.[1a] It eventually birthed the twin Greater Daemons Dexcessa, the Talon of Slaanesh and Synessa, the Voice of Slaanesh.[2]

In a bid to reach the echleons of godhood, the Khainate Grand Matriarch and High Oracle Morathi journeyed to the Realm of Shadow in order to enact a blood ritual to steal the powers of the Chaos God Slaanesh, who was imprisoned in Uhl-Gysh, the place between shadow and light.[1a] Feeding the God of Excess with the blood and souls of the followers of Khorne, Nurgle, and Tzeentch, Morathi glutted Slaanesh and opened a connection between the deity and the Máthcoir, the grand central cauldron in Hagg Narr, and used the powers of the Ocarian Lantern to draw whisps of soul matter from the Dark Prince himself.[1a] ​As she was absorbing the king-souls from Slaanesh, one resistant and struck her, the act cleaving off a portion of Slaanesh's power and forming a protean entity known as the Newborn.[1a][1b].

Screaming across the sky, the Newborn left a gaping trail of brilliant iridescence, transforming the land near its path before landing in a cradle of shadowed earth.[1b] Thousands of Hedonites followed the Newborn to its resting place to witness its birthing of Dexcessa and Synessa.[2]