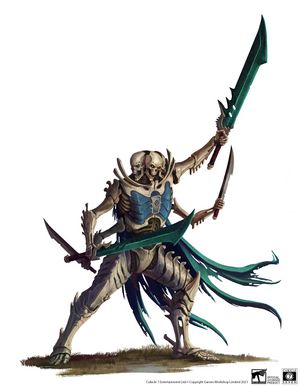 Necropolis Stalkers are four-faced and four-armed war giants that stand twice the height of Mortek infantry created by the Ossiarch Bonereapers to be used as shock troops. Each face of a Stalker’s quadrangular war-mask contains the essence of a legendary warrior forming a gestalt where each aspect of can assume control of the Stalker’s body at a moment’s notice. These aspects are created from the souls of weapon masters specialised in a form of fighting which has been greatly enhanced in death. Thus by merely rotating the head the Necropolis Stalker can change from an offensive style to a defensive style in a blink of an eye. [1]

Necropolis Stalkers normally fight with a eight-foot-long spirit blade held in each upper arm that can bisect a human in a single blow. Their lower arms they hold nadirite daggers the size of bastard swords. Others, specially those that contain the spirits of warriors who favoured heavy blades in life, use Dread Falchions instead which are weapons empowered by so much spiritual force that they can cut through stone with a shriek of displaced energy.[1]