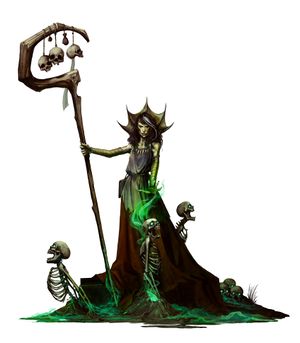 Necromancers are Deathmages who have sacrificed everything, including their soul, in the pursuit of forbidden lore so they can gain mastery over the dead and avoid death.[1][2][3b][3d]

After dying, powerful Necromancers have their bodies enshrined in reliquaries inside the Mortis Engines.[3c]

Would-be necromancers are desperate men seeking this magical lore and often do so by becoming apprentices of Vampires and Necromancers. Only a few escape a grim death at the hands of their would-be tutors to become powerful spellcasters with a broken sanity from the horrors they have witnessed. Because of this they are considered twisted and corrupted individual.[1][2][3b][3d]

With a simple gesture they can summon undead or animate broken corpses, like rotting corpses and Skeleton Warriors from their graves and bind them to their service. These undead minions often put themselves in harms way to protect their Necromancer.[1][2][3b][3d]

Some Necromancers ride to battle on the back of Nightmares.[3a]