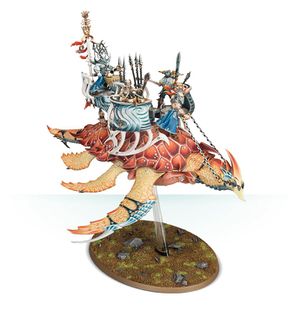 An Akhelian Leviadon miniature with a Void Drummer on the back.

Void Drummers serve within the four aelf crews that operate on Akhelian Leviadons. Whereas the other three crew members are Akhelian, Void Drummers are Namarti, the withered souled serviles of Idoneth society.[2a][1a]

These masked Namarti serve within the crews of Akhelian Leviadons, using light distorting enchanted drums to make it difficult for foes to target the already heavily armored war beasts and nearby comrades. They are the only Namarti to serve on the crew with the two Harpoon Launchers manned by Akhelians and the crew's leader and pilot of the beast being an Akhelian Ma'harr.[2a]

Void Drummers use Void Drums, enchanted instruments that refract the light with its mesmerising rhythm around the Leviadon, its crew and nearby allies, making them hard for enemy artillery and missile troops to target them.[1b][2a]