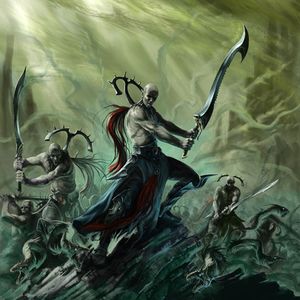 A group of Namarti Thralls.

Namarti Thralls form the bulk of the Namarti caste of the Idoneth Deepkin. Thralls are little more than subservient slaves within the Enclaves, forced to serve the noble Isharann and Akhelian as common labourers, tradesfolk, or else serve within the military. [1b][1a][3a][4]

The Namarti of the Idoneth Deepkin are those aelves among the Idoneth Deepkin found to have withering souls, it is the Isharann Soulscryers who can discern and label what unfortunate aelves are born with this affliction. Without a new soul Namarti will not live past infancy and even those granted precious souls are destined to live a short life where they are little more than second-class citizens within the Enclaves. Most Namarti can hope to only live three or four decades, a meager and short life to the aelven mindset.[1a]

But one does not require the ability to see souls to recognize a Namarti, as each is forced to wear an iron collar and a half-soul rune is found upon their heads which are placed upon them when they are given new souls. This is often taken a step further, as many collar fittings will involve the Namarti being ritually scarred to further mark them as mere thralls.[1a][1b]

Most Namarti serve the Enclaves as labourers and craftsmen, only the most physically fit among them being drafted into the Namarti Corps. Despite their ailment, with bald heads and empty sockets where their eyes should be, these Namarti still possess the physical grace of elves with powerful, muscular bodies. Most of these become the infantry troops known as Namarti Thralls while others become Namarti Reaver.[1a][1c][4]

Within the armies of the Enclaves, Namarti Thralls make up the main body of the infantry. The duty of these Thralls is to pin down and engage the enemy, so that mounted Akhelian can outflank the foe and Isharann can safely perform their magic. This is a grim and deadly task, and Namarti casualties can quickly become high during battle. Many Thralls resent this deadly toll and their lowly status, but none within the enclaves understand the need for more souls than the Namarti, so they gladly, if begrudgingly, risk their lives to gain them.[1a][3a][4]

Thralls are usually combined with Namarti Reavers into the formations known as Namarti Corps, each corps is led by an Isharann Soulrender, whose magic can be used to revive fallen Namarti. Such a corps tends to comprise half the strength of a Idoneth Phalanx.[1c]

Units of Namarti Thralls will also tend to have an Icon Bearer.[1d][3a]

Thralls use a wide variety of two-handed weapons known as Lanmari Blades, like great scythe-axes, two-handed swords, glaives, and intricate polearms. This preference for heavy and long-reaching weapons are used to drive off the wild sea-beasts and teeming swarms of predatory fish that prey upon the people of the Enclaves. When it comes to the battlefield these blades are both good at attacking large enemies as well as massed ranks.[1a][3a][4]

Namarti wear less ornate armour, with neck crests behind their heads that give the impression of spiked horns, than their superiors, as it fits their disposable nature. The neck crests of the Icon Bearers carry a Mathlann slave rune.[4]