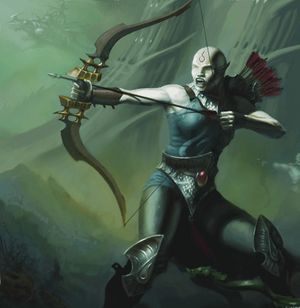 A Namarti Reaver ready to shoot her bow.

The Namarti of the Idoneth Deepkin are those aelves among the Idoneth Deepkin found to have withering souls, it is the Isharann Soulscryers who can discern and label what unfortunate aelves are born with this affliction. Without a new soul Namarti will not live past infancy and even those granted precious souls are destined to live a short life where they are little more than second-class citizens within the Enclaves. Most Namarti can hope to only live three or four decades, a meager and short life to the aelven mindset.[1a][4]

But one does not require the ability to see souls to recognize a Namarti, as each is forced to wear an iron collar and a half-soul rune is found upon their heads which are placed upon them when they are given new souls. This is often taken a step further, as many collar fittings will involve the Namarti being ritually scarred to further mark them as mere thralls.[1a][1b]

Most Namarti become labourers or craftsmen, while others join the military of the Enclaves. Despite their ailment, with bald heads and empty sockets where their eyes should be, these Namarti still possess the physical grace of elves with powerful, muscular bodies. Many of these become Namarti Thralls, the physically fit and graceful infantry of the enclaves. Others however become scouts and archers, whose duty it is to do the reconnaissance work that Akhelians consider beneath them, these are the Namarti Reavers.[1a][4]

Despite their lack of eyes, Reavers have keen and uncanny senses that make them deadly archers. They aim by sensing subtle changes of pressure within the ethersea and minute electro-magnetic pulses, not unlike the blind predators that stalk the deep, lightless seas.[1a][4]

They are most often tasked with probing enemy defenses and harrying their forces. Other times they will distract enemy forces with barrages of arrows, allowing Akhelian cavalry to charge in and devastate enemy lines. Their ability to move swift across the battlefield and strike ahead of the army to weaken the foe helps.[1a][3a][4]

Reavers are usually combined with Namarti Thralls into the formations known as Namarti Corps, each corps is led by an Isharann Soulrender, whose magic can be used to revive fallen Namarti. Such a corps tends to comprise half the strength of a Idoneth Phalanx.[1c]

Each unit of Namarti Reavers has an Icon Bearer.[1d][3a]

Namarti Reavers go into battle wielding Whisperbows, which fire arrows without making a sound. They have a fluid firing style that allows them to carefully, but swiftly, aim their fire or shot quick volleys of arrows. They also have Keening Blades, designed for stabbing, they can use in melee combat.[1d][3a][4]

Namarti wear less ornate armour, with neck crests behind their heads that give the impression of spiked horns, than their superiors, as it fits their disposable nature. The neck crests of the Icon Bearers carry a huge wrought Idoneth Thrall rune.[4]