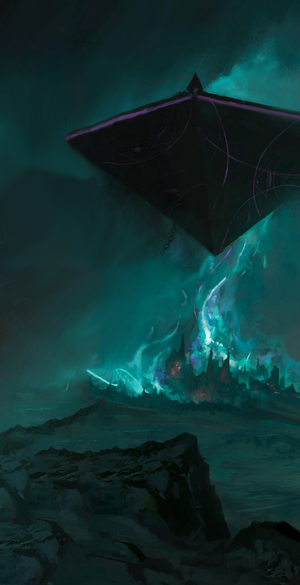 Nagashizzar, the Silent City lies at the heart of the Realm of Shyish.The city was created from the first mountain to rise from the eternal seas emulating the city that had been in World-that-was. [1a]

It is many-pillared, laid out and built according to the ancient formulas of the Corpse Geometries and is akin to a great machine constructed of stone and shadow. Within it are vast lightless avenues of black stone veined with purple, and empty squares, where dark monoliths have been raised in reverence to Nagash’s will. These polished smooth cyclopean monuments were made from shadeglass, vitrified grave-sand and are harder than steel and which resonate with the winds of death. [1a]

Below the city was the underworld of Nekroheim, from which all other underworlds had sprung. Into this the apex of the Black Pyramid stretched down while its base sprawled across the city. Its sickly radiance casts shrouds of frost and fog whilst an eternal corona of wailing souls orbits it.[1a]

Nagashizzar is in fact the name of not one but nine-fold cities in Shyish all having a Black Pyramid. They are like outposts of the city, part of the whole but separate and is said to have nine hundred watchtowers. [2]

After Nagash's death during the Battle of the Black Skies the forces of Chaos razed the fortress to ground leaving nothing but a blasted crater radiating fell energy.[3]

In the Time of Tribulations, Nagash not only rebuilt his city at the centre of the realm but also constructed a vast new Black Pyramid that dwarfed his previous versions. This he would use to enact a new Great Work that would ensure that no soul could be taken from him on the death of a mortal.[1a]

Many armies converged on the resurrected city from the various factions of the Mortal Realms but as they fought each other and the defending undead, the Great Ritual was completed and the Necroquake began. [1a]

Following the Necroquake, the whole Realm of Shyish was altered and the realm became a metaphysical whirlpool drawing souls down to Nagashizzar and the Black Pyramid. [1b]