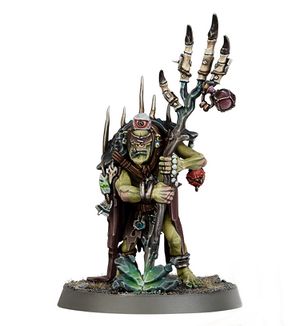 He wields a Bogbark Staff and a Backup Stabba into combat. He brew elixirs to empower the venom of his fellow Kruleboyz, notably without the help of a Pot Grot.[1]

He has a seeing-eye rock on his head that he believes allows him to observe the battlefield even with a blindfold on. The truth is that it does nothing but look neat.[1]