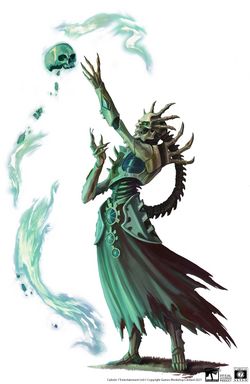 Mortisan Boneshapers are Ossiarch Bonereaper wizards of the Mortisan caste, specializing in the art of ossification. They are masters, able to create new Bonereaper constructs in minutes by stripping the bone of the tithed and drawing it forth with gestures and reconstituting it via the magic into the strong yet flexible bone-stuff of the Ossiarchs. In battle, they also repair any damage sustained by Bonereaper creation. Gothizzar Harvesters often accompany them to provide a steady supply of construction materials.[1]

Boneshapers are constructed from the remains of the finest artisans in all Shyish with many hailing from Anadiria, the underworld of creative souls where they were supposed to practice art for its own sake for the rest of eternity. Under Nagash, instead of celebrating beauty and skill their talents are bent towards the business of warfare. They are still skilled artisans and when not in battle they create the vast edifices and fortresses that the Ossiarchs raise to the glory of Nagash. While this allows them to engage in something close to true creativity, attempting to outdo one another these are merely distortions of their craft intended only to venerate an unending regime of death.[1]

Mortisan Boneshapers are armed with Ossified Claws but their magic allows them to conjure great clouds of bone-shards that can be hurled at the enemy.[2]