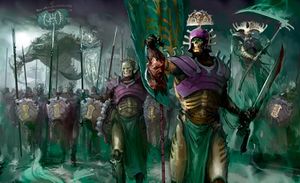 Mortek Guard are battle-constructs created from dense bone and dozens of souls that form the core of the Ossiarch Bonereapers. In battle they can either fight as individuals acting on their own instincts or act with unerring synchrony based on the demands of their Mortek Hekatos leader. At the orders of their commander Mortek lines turn and reform in an instant to create a wall of Nadirite weapons and they never break rank.[1a]

While constructed to fight Nagash's wars without question or hesitation they are not unthinking automatons and are capable of independent thought but limited to matters of conflict. During the soul-crafting process it is made sure they have total obedience and devotion to Nagash but are given sufficient autonomy to ensure that they can fight on skilfully should their Hekatos leaders or even the generals themselves are cut down. [1a]

The primary duty of the Mortek Guard is to defend their masters as without the Mortisans and the Lieges the Ossiarch war machine will be slowed and robbed of reinforcements. The Mortek Guard form shieldwalls around the Mortisans, so they can operate safetly behind the nigh-impenetrable bulwarks of heavy shields and bodies if necessary while weapons lance forward to impale those who get too close.[1a]

Each warrior is armed with a nadirite blade or spear alongside a heavy shield, their weapons are imbued with deadly Shyishan magic from Nagashizzar and even a minor wound from such a weapon can cause a painful and near-instant death as the victim's soul is devoured by the necrotic energies of the Shyish Nadir. Some of them may instead carry a two-handed Soulcleaver Greatblade while a Necrophoros carries a standard.[1a][2]