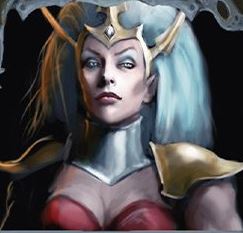 Morgwaeth the Bloodied is a Hag Queen of the Hagg Nar sect of the Daughters of Khaine and the leader of Morgwaeth's Blade-coven. [1]

She became famous for the huge amount of blood she has spilt in the service of Khaine, her own blades having opened thousands of throats cities drowned in slaughter by her fury. [1]

Morgwaeth is accompanied by a Blade-coven of fearsome zealots who exult in the throats they slit and hearts they impale as they travel. [1]

Morathi dispatched her to find an element of Khaine in Beastgrave, but was vague on the detail, leading Morgwaeth to consider the mission a form of exile. After all Morgwaeth had stated publically that it was very convenient that the High Oracle was the sole interpreter of the gods wishes and could not be gainsaid. [3a]

She is armed with a Glaive of Khaine. [1]