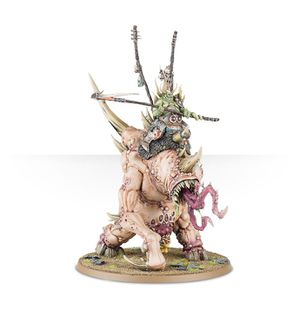 Morbidex Twiceborn, the Avatar of Nurglings is one of the three Maggoth Lords.[1]

He was born in the middle of a firestorm that swept his village and was badly scarred as a result, but he grew up to be a formidable warrior and the chief of his tribe. Blaming Tzeentch for his childhood trauma, he offered his service to that gods rival, Nurgle scaling a vast cliff that led to the Realm of Chaos where he was engulfed by a horde of Nurglings. They posed riddles to him, pushing him onwards and upwards for correct answers and transforming parts of him to match them if he was wrong. When he reached the summit of the horde he had become the avatar of Nurglings.[1]

He rides a large pox maggoth, Tripletongue and often leads a vast mob of Nurglings to battle spending many centuries in the Realm of Ghyran.[1]

When the Stormcast Eternals were cast down into Ghyran to try and find Alarielle, he was one of many champions that were flung against them, attempting to ambush them in the Rotwater Blight but his forces were disrupted and uncovered by local Sylvaneth. [2]