From Age of Sigmar - Lexicanum
(Redirected from Morathi-Khaine)
Jump to: navigation, search 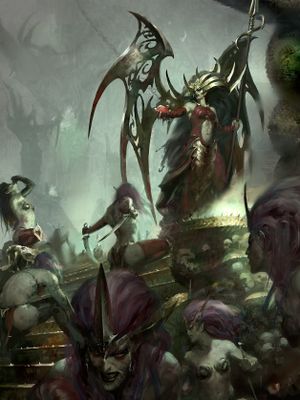 Morathi in her Aelf form as the High Oracle of Khaine. 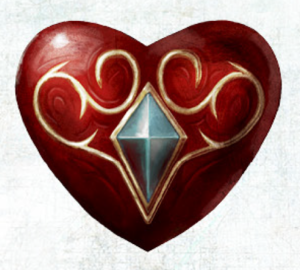 The Iron Heart of Khaine.

Morathi is a goddess of the Mortal Realms. Before her apotheosis, she was known as the Grand Matriarch and High Oracle of the Daughters of Khaine, a cult that worships the dead god Khaine. In the Mortal Realms she is renowned as the mother of the Daughters of Khaine, a former member of the Pantheon of Order created by Sigmar. Secretly she was also part of the other aelven gods scheme to capture and imprison Slaanesh and take back the aelven souls the God of Excess had consumed.[1][8a]

Morathi is a figure from the World-that-Was and even in that world she was ancient, a devious queen who played a critical role in the Sundering which in turn shaped the entire history of the elven race in that world. [1]

Her first experience of the new world was hurtling downwards to crash into the Umbralic Sea, surviving by her instinctual use of powerful magic’s to shield herself. Eventually she reached the shores of Hellezar and wondered through the strange shadowy land, slowly regaining her memories and sense of self. [5a]

Quickly she learned that she could manipulate the shadow energy that permutated the Realm of Ulgu and used it to cloak her true form which filled her with loathing and disgust, bringing back unwanted memories of her torment after being consumed by Slaanesh.[5a]

Lonely she called forth mist elementals and Shadow daemons to keep as company or as lovers. Together they explored the realm, travelling throughout all thirteen regions of Ulgu. For untold years she encountered none of her own kind. [5a]

Then Morathi was found by Malerion, a twisted form of her son Malekith, at the centre of a glade filled with shadow daemons. She was still of flesh and blood, but had changed since he last saw her during the End Times. This reunion was hostile and filled with recriminations and anger and yet even through neither trusted the other, they managed to make an uneasy truce. Together they created a great citadel which become the greatest kingdom of the realm – Druchiroth. Eventually Morathi and her son joined Sigmar's Great Alliance having been aided by the god. Although they contributed to the burgeoning civilisations, they were mistrusted by many others of the Pantheon.[3][5a]

Morathi, as had always been her way, attempted to charm and seduce others, but overstepped when she tried to do so with Nagash. Angered he lashed out at her, revealing her true form and she fled from the Pantheon in shame, abandoning her former allies.[2][5a]

Taking advantage of her weakness, Malerion took the Shadowlands and the capital of Druchiroth for himself, the last which they had create together, granting her only rule over the centre of the Umbral Veil – a dark and almost impenetrable part of the realm. Few could enter that land and retain their sanity, none had returned, yet there she founded an aelven witch cult and together they built Hagg Nar a temple-settlement dedicated to Khaine. Betrayed and despondent, Morathi waited for an opportunity, constantly looking for ways to regain power.[2][5a]

She searched for signs of Khaine and finally discovered the location of his iron heart - guarded by the godbeast Kharybtar, she proceeded to seduce the creature and steal the heart. It awoke however and fell upon her and they fought for thirteen days before she overcame it, drinking in the energies of the artefact.[5d]

The current aelven gods Tyrion, Teclis and Malerion had discovered that the souls of their kind were still held tormented within Slaanesh. Now they sought her out as someone who would not only have unique insight into their captor but also could serve as irresistible bait for the Dark Prince. [5b]

Together they not only trapped the god, but also were able to extract the souls from within it, each taking a portion of them to restore in their own unique way. Morathi was given a portion of those souls to reshape into forms she saw fit – and the Daughters of Khaine were the result.[1]

She created the Máthcoir a great cauldron which she would use to create the Melusai and the Khinerai at Hagg Nar. She named herself as High Oracle of Khaine and her daughters began to flourish, growing in numbers and power until temples-colonies began to spread across the Mortal Realms. [5b]

The Realm of Ulgu was not, initially at least plagued by the followers of Chaos but as time progressed it too began to be assaulted. Morathi had also managed to ensure that her portion was slightly larger than her fellow liberators and this damaged the integrity of Slaanesh's prison, drawing its followers more and more to Ulgu. Morathi herself fought many battles at the head of her daughters, defeating such foes as Krulla Sha'vhr and the Legion of Excess led by the Keeper of Secrets Glittus. [5c]

She re-joined the alliance, seeing it as a way to not only revenge herself on all those who had spurned, scorned or tormented her but more importantly ascend to true godhood, fueled by the blood sacrifices she makes. [2]

During the Time of Tribulations the two hundred and forty-four Lords of the Heavenhall of the city of Hammerhal debated fiercely about what action to take before Morathi arrived. She addressed them all and convinced them to send the cities armies to join her own in attacking the Realm of Shyish. [4]

The Shadow Queen prophecises that Slaanesh will eventually escape from her prison. She delivers this prophecy to the new aelven gods, warning that while they might be powerful, that Slaanesh is beyond their comprehension and none of them have the might to fully contain them. Malerion openly disrespects her and Tyrion is indifferent. Only Teclis seeks her wisdom in secret. To prepare for this war Morathi draws ever more Scáthborn from the belly of Slaanesh.[7a]

Morathi's spies can be found in every corner of the Mortal Realms, always looking for artefacts of the long-dead god of murder. It was from those spies that a group of Khainite Shadowstalkers that brought the news about Archaon's plans to Morathi.[9] The Everchosen wanted to use a newly discovered vein of Varanite Realmstone to break the seal Sigmar placed on the Meteoric Gate, the Arcway connecting Azyr to the Eightpoints.[8a] Morathi has long since desired Varanite, declaring it to be the "Blood of Khaine", and each Khainites duty to reclaim it from the unworthy.[8a]

Presented with this opportunity, Morathi hatches a plan. She meets with the God-King Sigmar in Azyr, and proposes an expedition into Archaons domain to remove the Varanite and scuttle the extraction operation. Sigmar, ever suspicious of the High-Oracle, reluctantly agrees as the risk of a Chaos invasion of Azyr is just too great.[8a] So both the God-King and Morathi muster their forces, assembling a host larger than anything seen since the Realmgate Wars. Determined to achieve their goal, bringing Morathi to Varanthax's Maw and taking the Varanite from the forces of Chaos. Warriors from multiple Khainite temples and Stormhosts marched into the Eightpoints using the Ghyran Arcway, the Genesis Gate. The first assault shmashed trough the chaos fortifications without much resistance.[8a]

While the forces of Order march towards their destination, the forces of Chaos are in disarray as Katakros, Mortarch of the Necropolis, starts another assault on the Varanspire. Unbeknownst to Sigmar, Morathi offered bones, infused with pure Ulgu shadow magic, in exchange for Katakros distracting the chaos hordes from her attack.[8a]

Morathi, who always valued her beautfy, found herself changed after escaping from Slaanesh's belly during the Age of Myth. Her true form is gigantic, her lower body that of a massive winged serpent, twisted by shadow magic and the depredations of Slaanesh, whilst her upper body retains her famous aelf humanoid beauty.[2] The runes on her serpentine underbelly represent destruction, vengeance, serpent, shadow and blood.[6] Her mastery of illusion magic allows her to hide this form from others. Instead of the serpentine Shadow Queen, she appears as a beatiful Aelven Queen. Her form framed by wings made out of the finest shadow-metal, and her supernatural beauty strong enough to paralyses her victims.[5e] While her illusions where strong, fooling most beings in the Mortal Realms, Morathi had to constantly devote a part of her power to keep up the facade. When her concentration was broken, or she gave into her emotions, her true from was revealed. After such an Event, it often took her days or months for her to return to her Aelven form.[5e]

After her encounter in the depths of Slaanesh, her physical form has been split in two. Her soul inhabiting two bodies at the same time, the Aelven Queen known as Morathi-Khaine, and the bestial Shadow-Queen.[8b]