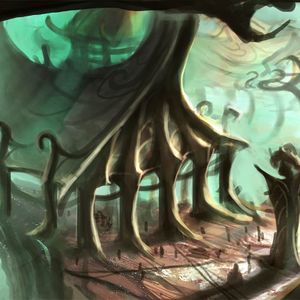 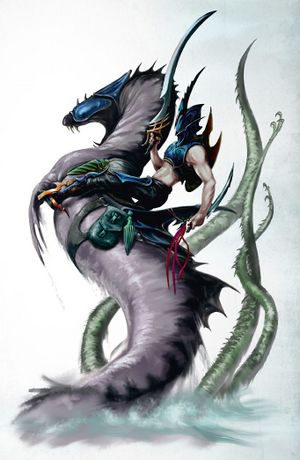 The Mor'phann Enclave is one the greater enclaves of the Idoneth Deepkin. Their name can mean a deep and deadly despair or a death-like stare and the other deepkin consider them dour, gloomy and reclusive even by the standards of the insular race.[1d] They themselves feel they are calm, measured and collected, focused on the task and unflinching in battle. Unsurprisingly they prefer dark clothing, mostly black but with sheens of dark blue and purple as well as gold trim. [1g]

Shrouded by fog, the Great Quagmire that is their home is also renowned for its oily waters and when the aelves emerge from it they are cloaked with a strange sheen [1d] and sometimes drip a noxious black fluid. [1g]

In war they use pale, tentacled beasts [1c] and their Tidecasters are able to summon icy ethereal mists to confound and slow enemies. [1g]

Fleeing from the light of reason of their creator god, Teclis, the Cythai splintered into six factions and sought the deep places of the Mortal Realms. The Mor'phann move to the deeps of the Great Quagmire in the Realm of Shyish creating their capital of Mor'drechi [1a]

Skaven searching for realmstone inadvertently tunnel into a colony of the enclave in Shyish - they are quickly annihilated and the Mor'phann construct further defences especially around their capital. [1b]

Raiders from the enclave strike the borders of the Great Quagmire and enter the Vale of Chains but accidently release a host of Nighthaunts that Nagash had cursed and who now seek vengeance on both the Lord of Death and the living.[3]

Archaon commands the skaven to continue their search for the deepkin, the enclave destroys three questing tunnels in a decade keeping their location secret. The Ionrach try to unite the other deepkin to aid the enclave but the Fuethán disrupt, threatening a civil war. [1b]

One of their offshoot enclaves, the Aighmar is destroyed by Skaven. [1d]

In the Time of Tribulations a horde of undead monsters drifts down to assault the city.[2]

The Necroquake results in massive assaults on all the deepkin across the realms. The enclave joins forces with the Ymmerloc and the Stormcast to fight Nagash.[1b]

The Chillhearts: Akhelian Guard who ride Ghost Fangmora who easily blend with the mists. [1f]

The have control over a number of Whirlways that enable them to move and communicate across the Realms. [1e]