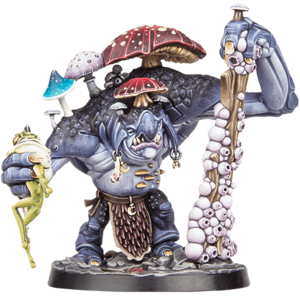 Mollog the Mighty is a Dankhold Troggoth that leads the Mollog's Mob underworld warband.[1]

He slept in a mushroom-littered cavern under the dunes of the Desert of Bones for centuries, only coming out of it to feed. Then a Skaven attacked him, so he destroyed and ate them, but in the fight his home was destroyed. He left with some of his fellow denizens of that cave to find a new one. He eventually found himself on the ruins of Shadespire and went underground to find a damp place to rest. Instead he found the Mirrored City and still searches for a new quiet home to sleep in, smashing any who would cross his path.[1]

He is an ancient Dankhold Troggoth that just wants to sleep somewhere dark and damp, but he keeps getting disturbed. He is hard to kill, because he's able to regenerate from wounds, shrugs off spells and uses his minions, Jabbertoads, Spiteshrooms, Stalasquigs and Bat Squigs to protect himself. These minions are loyal to their master and will sacrifice themselves to protect their master. In combat he hurls Jabbertoads at a range, that sticks to their foes, or attacks his foes in melee with Puff-fungus Club, that releases a cloud of toxic spores when it hits a foes.[2][3][4a]