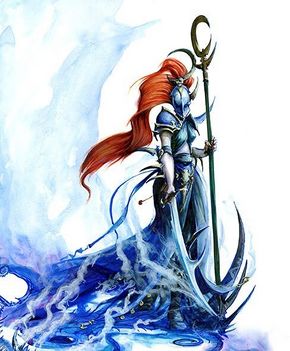 The Mistweaver Saihs are powerful aelven enchantresses that hail from the Realm of Ulgu.[2][3]

Little is known about these sinister figures except that they hail from the Realm of Shadow, Ulgu. Who they call master, who they consider friend of foe, or even their most basic motivations - all remain a mystery to those that fight alongside them. It is only certain these sinister figures are power enchantresses.[1a]

Remaining veiled behind skeins of illusion, they turn their enemies' own minds against them. Drifting amidst a swirling sorcerous haize, these figures flicker in and out of sight at will, sowing confusion and paranoia amongst those who have drawn her ire. Enemies will seek them to no avail, blindly lashing out with clumsy swipes of their weapons, only to be struct down by their insidious powers. Some may be beguiled into gladly stumbling into the points of their blades, others may claw frantically at their own flesh, tearing themselves apart or immolating their comrades with blasts of magic as the cruel illusions of the Mistweavers do their work. Amidst all the carnage they invoke, these enchantresses remain distubingly serene, the eyes at the heart of a storm of illusory horror and violent bloodshed.[1a]

A Mistweaver Saih is armed with an aelven blade and a magical staff. With this staff, a Mistweaver Saih may summon a glimmermist to shroud themselves or perform an illusory assault as well as other common spells.[1a]