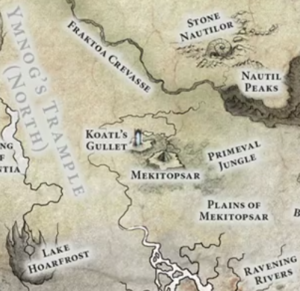 Mekitopsar is a region of plains and jungle in the Ghurish Heartlands inhabited by the Seraphon of the Koatl's Claw constellation.[1b]

During the early years of the Age of Chaos, a Clans Pestilens assault upon the primary temple-ship of the Koatl's Claw constellation resulted in the ship's perilous descent upon the Ghurish Heartlands. The tribal communities that once inhabited the plains were cast into ruins by the collision's aftershocks, and were forced to turn to depraved gods to survive. With their Slann Starmaster confined to his deathbed by an infection from the skaven, and the skink attendants in disarray, it was the saurus leaders that took charge of the [Seraphon Constellation|constellation]]. Driving their spawning engines into their upper limits, the saurus of Koatl's Claw created a breed of soul-scarred and savage saurus, who were then unleashed upon the corrupted tribes of Mekitopsar.[2a]

Since the arrival of Koatl's Claw, much of the plains region was transformed into dense jungle at an alarming rate. The plateau has since become a stalking ground for huge, reptilian monstrosities. Everything in Mekitopsar is predatory, from massive man-trap plants that can swallow a warrior whole to Carnosaurs that roam its depth and lizardfolk that brutally punish interlopers.[1b]