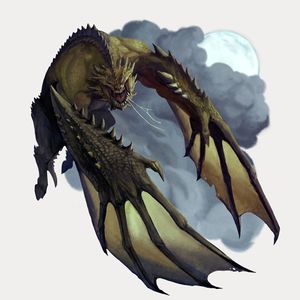 Maw-Krushas are a species of belligerent beast ridden into battle by Orruk Megabosses of the Ironjawz warclans. [1][2a][3] Most of these bestial predators originating from Ghur’s vast mountain ranges. [6a] Nothing can stand in the way of this pair and the massive amount of kills they do on the battlefield inspire their fellow Orruks to fight harder.[1][2a][3]

Maw-krushas can't really fly like normal winged beasts. They are too big, too tough, solid lumps of muscle and bone that even the widest wingspan can't keep aloft indefinitely. Instead, they leap and glide, launching themselves high into the air with a tremendous shove of their heavily muscled forelimbs to catch the air and soar upon it.[5a]

These creatures are tiny-minded, short-sighted and ill-tempered. They enjoy smashing stuff as much as the Orruks that tame them, despite not getting along well with them.[3][4]

Exceptionally angry Megabosses often seek and subdue these creatures to use as mounts. This often involves yelling really loudly and battering their heads until they submit. Megabosses ride on their backs attached by chains. Despite all of that, these creatures are never truly tamed and need to be constantly reminded of who's in charge with a liberal application of an iron boot to the back of their heads.[2a][3][4][6a]

The Ironjawz often strap metal plates to wings and a blade at the end of the tails of the Maw-Krushas. Some Maw-Krushas are equipped with masks.[3]

Exceptionally angry Megabosses often seek and subdue these creatures to use as mounts. [4][6a] Maw-krusha bones are particularly prized to Orruks of the Bonesplitterz, especially the Bonegrinz Warclan, for they often resonate with the hulking creatures’ mean and cruel spirits. It is said that those wielding such a potent relic can bellow at the same ear-splitting volume as the colossal reptiles. [6b]