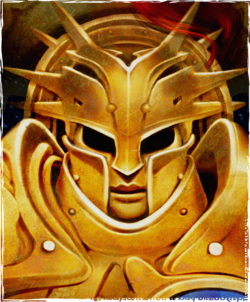 Marellus Lionheart is an undefeated Retributor-Prime of the Hammers of Sigmar Stormcast Eternals. He was once the stalwart champion of the Leonus tribe.[1]

As a member of his tribe, Marellus had never before lost in personal combat, facing off the hulking fiends of the invading Bloodcall Horde and felling them despite their larger size. Sigmar saw him a hero of mankind and knew that he would eventually fall to the forces of chaos. With a bolt of lighting Sigmar snatched him from battle and reforged him into a Stormcast Eternal and gave him the name of Marellus Lionheart.[1]

He gained his rank as the Retributor-Prime in the Gladitorium, wieding his lighting hammer with a deftness that belied the colossal weight of its impact. He led his retinue to greatness in battle.[1]