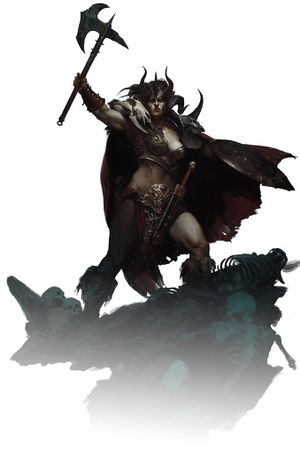 Marakarr Blood-Sky is a Darkoath Warqueen who serves the gods of Chaos, swearing that she will bring carnage in their name. She is an Empress of the barbarian clans and a Warqueen of the Reaver Wastes whose kin obey her without quesiton. [1][4]

In the Time of Tribulations she led thousands of her clan brothers and sisters into battle in the Realm of Shyish.[1]

Marakarr is a member of Archaon's Inner circle, having shown her prowess in the arena at Varanspire.[3]

As the Time of Tribulations began to gather pace, she arrived at the court of Tarvak the Flayer and demanded his service and that of his bloodbound followers, the Flayed Legion. He refused to bend the knee and quickly challenged her which resulted in a short duel in which she took his head and the loyalty of his warriors.[4]

She took her horde through the Abyssal Fires realmgates to Shyish, leading the followers of all the dark gods of Chaos to battle, when her vanguard of Bloodbound were attacked by many spirits she roused her warriors to greater wrath and a further hours battle saw the spirits dispersed. Neither the dead or the living they found in that realm would guide them to their goal of Nagashizzar.[3]

The horde was confronted by the Throttler Brayherd, who Marakarr enlisted by slaying their leader at the Battle of the Great Headstone and the beastmen guided her through the Hangman's Wood, heading toward Copper Pinnacle whose peak had a newly created Warscryer Citadel that observed the lands of Nagashizzar. They trekked across the Ossian Dustsprawl before the Mortisan Chamber of the Anvils of the Heldenhammer struck during a great storm. Her force beat them back and continued their journey.[3]

The war between the stormcast and the followers of chaos continued to grow until the lightning of Sigmar was called down upon Marakarr and her champions, sending them crashing down into the until then hidden caverns.[3]

Marakarr had survived however and made the dangerous trek back to Archaon's court and offered her head as compensation for her failure. Archaon decided to spare her and she became ruler of the marauder hordes of the Eightpoints.[6a]

Marakarr would go on to participate in the Siege of the Eightpoints. Achieving victory in the Battle of the Forest of Eyes and suffering a humiliating defeat in the Battle of Haradh's Torment.[6a][6b]

Her wargear includes a horned helm that denotes she has defeated a powerful daemon[2] and an Infernal Runeshield[5] with sigils of each of the Mortal Realms surrounding the rune of the Realm of Chaos.[2] This Runeshield is blessed by daemonic power and inscribed with the runes of the barbarian tribes she has conquered.[5] Her pale skin is covered in duelling scars and her armour is battered and dented whilst her axe is adorned with inscribed oaths of fealty to the gods of Chaos.[2]