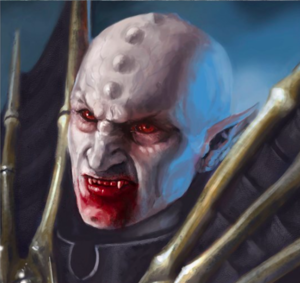 Mannfred von Carstein is the Mortarch of Night and Nagash's right hand.[1] Mannfred often seems to be scheming against his lord, but just as frequently he carries out his masters will nonetheless.[3]

Like the other Mortarch's Mannfred founds his own nation, Carstinia a sad echo of his old home including animated corpses made into the likeness of Vlad von Carstein, Konrad von Carstein and Isabella von Carstein but quickly tires of it and abdicates.[5]

He supported the rebellious nobles of Nulahmia, supplying them with powerful artefacts intended to incapacitate his rival Mortarch, Neferata.[4a][4b]

While searching for a gateway to Stygxx he was captured and tortured by Taka Woebringer and his army of Bloodbound. He was found by the Bull-Hearts Warrior Chamber of Hallowed Knights under Tarsus Bull-Heart who rescued him and defeated Taka and his Bloodbound. In return Mannfred promised to guide them to the underworld of Stygxx to bring their message to Nagash. [6][7]

During the founding of Gravewild, Mannfred was manipulating a Slaaneshi war band and attempting to awaken an army of the dead underneath the city. He was soon captured by the Hallowed Knights claiming the city. Haunted by the ghost of Tarsus, Mannfred convinced Ramus, Lord-Relictor of the Bullhearts, that he could help them save Tarsus from Nagash.[8a][8b][8c]

In return Ramus released albeit on a short leash, and they and some Bull-Hearts travelled to Nagashizzar followed by some of the Steel Souls and Bakhos. They reached the gates of Nekroheim and Mannfred tried to use a magical incantation to open them to reach Nagash. While Mannfred was attempting this, Bakhos and the Steel Souls led by Gardus reached them. Nagash discovered this and opened the gates himself and quickly killed Bakhos. Then Mannfred and Gardus tenuously negotiated with Nagash for the release of Tarsus Bull-Heart's soul and the land around Gravewild for having killed some of the Chaos worshippers surrounding Nagashizzar. Mannfred was then allowed to leave by both Nagash and Gardus.[8e][8f][8h][8i]